Tessa handed out some examples of badly written sex scenes.  The range of euphemisms from mangos to red hot lava left the group giggling or cringing. It was a fabulous ice breaker. Once I bravely overcame the giggles, we got down to the real work of the morning. I’m not sure why I was surprised to find that badly written sex scenes are the same as badly written fiction. Common problems include losing the characters voice. If the characters start to use words during a sex scene that they – well, wouldn’t, it jars. Bad dialogue, too many clichés are other common problems.

This all led up to the moment I was nervous about…writing a sex scene. But, with the help and encouragement from Tessa, I went for it. Alas, I wasn’t brave enough to read mine at the session, but it was extremely empowering to have a go. And I have to say, reading my rushed attempted before blogging, I was not displeased with the result.

But I don’t think I will be as apprehensive about having a go in future.

I hope Tessa come to the group again. 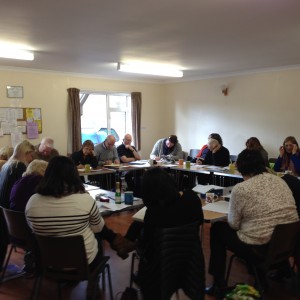