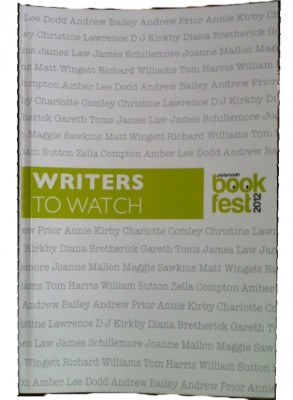 As part of Portsmouth Bookfest 2012, writers from the city and surrounding area were invited to perform their work in Portsmouth's public libraries.

As part of Portsmouth Bookfest 2012, writers from the city and surrounding area were invited to perform their work in Portsmouth’s public libraries.  Since the year was 2012 and 20 writers were invited to speak for 12 minutes each, the project was called “20×12”

The resulting performances revealed an astonishing variety of extraordinary talent active in the city.

This book showcases the work they performed and is your introduction to well-established and up-and-coming authors.

All are definitely writers to watch out for!

Look Inside
Disclosure of Material Connection: Some of the links in the page above are "affiliate links." This means if you click on the link and purchase the item, I will receive an affiliate commission. I am disclosing this in accordance with the Federal Trade Commission's 16 CFR, Part 255: "Guides Concerning the Use of Endorsements and Testimonials in Advertising."