Today, I was lucky enough to get an incredibly talented young writer to come and give a writing session at The Writers at Lovedean. Damon L Wakes novella is looking for pledges on the Unbound scheme. Not sure what that is? Well, Unbound is a crowd funding project, where writers have the opportunity to get published by Penguin. Damon came to the group to explain how the scheme works and to ask for pledges for his novella, Ten Little Astronauts, an Agatha Christie-inspired murder mystery novella set on board an interstellar spacecraft. He also explained why it is a good idea to blow up dogs in his five great writing tips!

I do hope you will check out his page on the Unbound and think about pledging!.

It’s been an exciting week for The Writers at Lovedean, due to our involvement with the Waterloo to Waterlooville 200 years project. It was only a few weeks since the event organiser, Clare Jefferson Jones, invited the writers group to get involved. 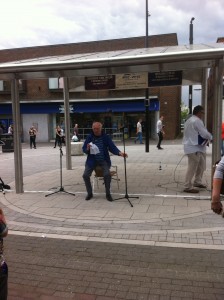 We wrote stories inspired by changes to Waterlooville over the last 200 years. Local retired musician, Mick Cooper was asked to read his piece Heroes at the unveiling of the commemoration plaque on Thursday 18th June. It was exciting to see Mick read in front of the Mayor and Mayoress. 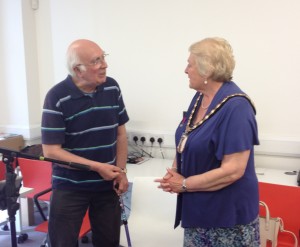 Saturday 20th June was a festival day in Waterlooville town centre. David Dunford and Mick Cooper read to a loud and excited crowd. Many people involved in spoken word events and poetry readings can testify that writers are usually in the tent next to the live music. I was amused to see we were placed next to a child dance troop. While David and Mick read, our pamphlet was distributed to the crowd. 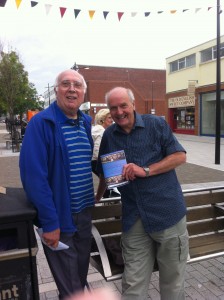 I was pleased that additional members of the group came to the events on both Thursday and Saturday to support their friends. 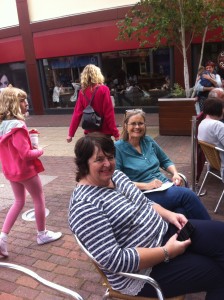 I’m so excited when I give out the Waterloo to Waterlooville 200 pamphlet to the writers on Friday. Clare did the most incredible job of publishing our work.